Even as the campus on Saturday celebrated the life and legacy of professor George N. Parks, who led the Minuteman Marching Band to national prominence during his 33-year tenure, it was clear that his influence will continue to be felt just as his death will continue to mourned far beyond the campus itself. 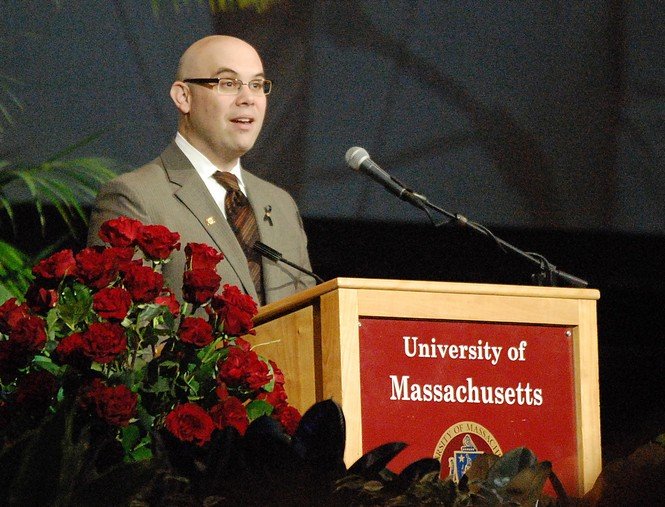 More than 900 alumni members of the band returned to campus over Homecoming Weekend for a memorial service held for Parks, 57, who died of a heart attack Sept. 16 while traveling with the 350-member band in Ohio.

Transcript of My Comments

This band, these “Lost Boys,” all of you, have become part of me in ways I could not anticipate. To illustrate how, George, I hope you don’t mind, I’m using your words from one of the experiences you provided me that gives me inspiration to strive. That experience… the Hook show… the ’93 band at Bands of America taught me what a group of friends can accomplish. The musicality of those few moments was something I had never before heard from a marching band. It was almost a dream to realize that part of that sound came from me.

“When I was in a high school band, I always had those times when I kinda wished that I had a band that would really work and really care…

I could argue that that thought represents a lot of what many of us felt as high schoolers, as college students, perhaps so for my fellow “Lost Boys” who are now parents themselves. For everyone gathered today.

But not just to have a band that sounds great or performs well, but for the team spirit imbued in that idea. We want to be liked, we want to contribute.

As a corporate manager, as a life partner, as a friend, I still have those feelings. I always will. Thinking back, I couldn’t pinpoint what George did or what he said to help me realize I was part of…

“…a group of people who really want to be together…”

That is all of us. Us “Lost Boys”. Us bandos. That Peter Pan. George Parks.

How many of us from how many Minuteman Bands over how many decades heard George proclaim “this will be one of the most memorable experiences of your life”? There’s no way to know. There’s no way to know because he believed it every time. Year in, year out George worked hard to provide those experiences, to open our eyes and hearts to what’s possible, to live. Make the most of it, indeed, Peter Pan.

This morning we all missed what I will fondly look upon as a Homecoming tradition. At rehearsal, George would rattle off any year and instantly recall names of the tunes, performances, the adventures each band experienced. Those avatars of what each Minuteman Band meant to the bandos who built it brought a jois d’vivre… a sparkle to his eye. Those annual moments of camaraderie brought generations of bandos together. The names changed. The places changed.      The essence remains. Peter Pan remains. His dream…. remains.