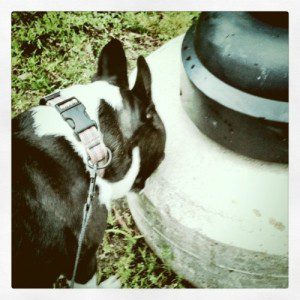 My dog has a head for social listening.

She does. If little Ella could talk or type, she’d be a listening champion.

While the new adage “getting information off the Internet is like taking a drink from a fire hydrant” might seem true, think like a dog for a moment. What does that fire hydrant tell you? What are you trying to learn from it?

Dogs smell. That’s right, they smell. And I don’t mean they stink. They actually smell. They smell everything. My own little Boston Terrier gets as much exercise over a one-mile distance if she runs with me, or if I walk and allow her to… smell. Smelling is how dogs interpret the world. They smell each other’s bums, they smell our crotches, they smell the grass, the trees, the trash and yes, fire hydrants.

They emit smells, too. No, not those smells. They mark territory with pee. Their paws and ears secrete odors they use to communicate with each other. These are all natural odors that we humans also produce, but our noses aren’t used in the ways a dog’s nose is used.

A million things go through a dog’s head when interpreting a smell. Where did it come from? Is that a cookie? Can I eat it? How long has it been here? What animal left this smell? Can we play?

Now imagine this process as layers of smells from many animals. Your dog will stand there stubbornly tugging at the leash until the smells are analyzed. Is everything safe?

Apply that dog smelling mentality to your own social media initiatives. Where did that tweet come from? Who wrote it? Why did they write it? Do I like it? Do my friends like it? Can we play?

A tweet is so much more than meets the eye. What’s the context? The writer’s frame of mind? Interests? Influence level?

Is the tweet part of a bigger conversation? What’s the topic? Is there a hashtag? It is organic? Or planned? Can we play?

Is the tweet revealing something unique? Think Arab Spring or Chrysler’s mishandled Detroit driver tweet or the unexpected marketing coup the Red Cross earned for itself and Dogfish Head beer.

So, if your gut (or your dog) tells you something stinks, listen up, but don’t wait for something to get rotten. Smell now. Smell everything.