Announcing the breaking of records without sounding like a broken record. The challenge was to generate buzz and excitement for a series of new product launches for EMC. The launches were “teased” through social media channels from various industry experts and potential clients, with global announcements made simultaneously in New York, London, and Singapore.

Based on a “Breaking Records” theme, we developed a number of effective marketing strategies and tactics to help generate intrigue and awareness amongst the target audience. A combination of social content and engagement activities, including a “broken record” game (putting broken record pieces together against the clock), and a direct mail “broken record” puzzle were among the tactics used to arouse curiosity of upcoming EMC products in the digital community. 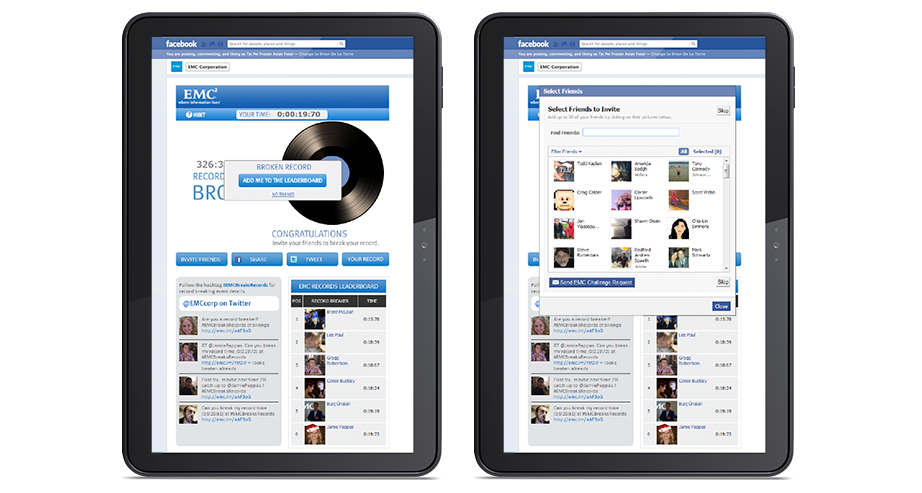 As manager of EMC’s corporate social media accounts, I worked with internal marketing and sales stakeholders to develop a Facebook game to highlight this new ground (and record) breaking campaign for EMC. In the social listening space, I identified the top 100 bloggers EMC hoped to bring into the fold to write about our products… good or not so good.

Over 20 bloggers accepted the invite to join us for the live portion of the “megalaunch” in NYC and the integrated approach between direct mail and Facebook succeeded in driving awareness. Over 30% of event registrations were sourced through social channels and laid the groundwork for future “digital-only” product launches livecast via EMC’s online community.